Bosnia and Herzegovina is located almost exclusively in the Dinaric Mountains, which makes the southeastern European state attractive for hikers and mountaineers. Thanks to the very special landscape, Bosnia and Herzegovina has served as a backdrop for numerous movies. Vast uninhabited stretches of land and wild animals such as wolves and bears can be found here.
Read on
Outdooractive Editors  Verified partner
Author of this page

Activities in Bosnia and Herzegovina

Attractions in Bosnia and Herzegovina

Narrow paths wind through colorful flower meadows and along refreshing lakes in the Zelengora Mountains or lead athletically ambitious hikers to the highest peaks in the Sutjeska National Park. This is one of the oldest national parks in Bosnia and Herzegovina and offers absolutely unspoiled nature with rugged rocks and crystal clear lakes as well as one of the last primeval forests in Europe.

By the way, if you are looking for peace and solitude, Sutjeska National Park is the right place for you. Hours of hiking without meeting a single person are possible here. For example, on the Maglič, with 2386 m the highest mountain in Bosnia, right on the border with Montenegro.

The canyons Neretva and Rakitnika

Deep views into the Neretva and Rakitnika canyons promise hikes over the wild ridges high above the gorges. On the other hand, those who are in their element in the water should not miss a rafting tour on the Neretva. Neretva is the most important river in Herzegovina. The 225 km long river rises south of the Zelengora mountain near the Sutjeska National Park. Into the Neretva flows the impressive Rakitnica canyon. The canyon, 24 km long and surrounded by 800 m high rock walls, rises above the village of the same name, Rakitnica, in the Treskavica Mountains.

Long distance hiking on Via Dinarica

The Via Dinarica is one of the most beautiful long-distance hiking trails in the world. On more than 1000 km it winds through the Balkans from Albania to Slovenia. Kosovo, Montenegro, Bosnia and Herzegovina and Croatia lie along the route. Hikers can choose from three different variants.

The so-called White Trail – the main route of the Via Dinarica – connects the highest mountain peaks of the Dinaric Alps. Alpine trails, narrow paths and views at their best can be found along the route. The Green Trail is just that: a green carpet of meadows and forests along the lower mountains of the Dinaric Alps. Along with the abundant wildlife, the Green Trail is a beautiful alternative to the alpine White Trail. The Blue Trail veers off toward the coast and the crystal clear waters of the Adriatic Sea. The mountains are smaller, but still no less attractive than inland. The fresh scent of herbs and the sea breeze are constant companions on the trail. 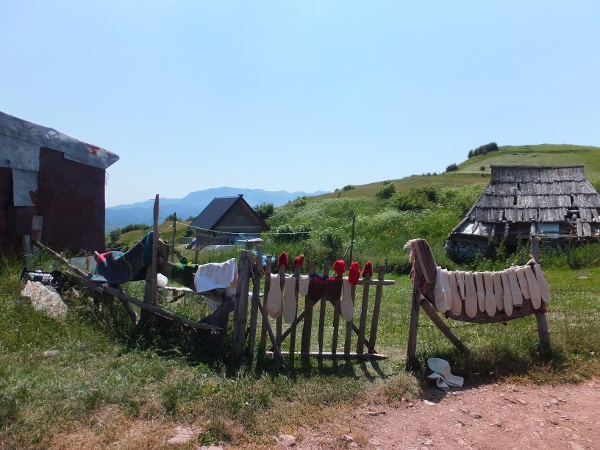 They can mostly only be reached via single-lane gravel roads with many potholes. Nevertheless, the bumpy journey to the mountain villages such as Lukomir or Umoljani is worth it.

Lukomir is the highest village in the mountains. Most of the inhabitants are shepherds who live from their sheep and their products. There, where there are significantly more sheep than inhabitants, electricity has been coming from the socket since 2002.

Umoljani, located southwest of Sarajevo, is much more accessible than Lukomir. A special feature here are the medieval gravestones that can be found around Umoljani. Small tip: In the mountain hut between Umoljani and Gradina, Emin, a villager, serves delicious typical dishes.

Show all offers in Bosnia and Herzegovina

Show all webcams in Bosnia and Herzegovina

Destinations in Bosnia and Herzegovina