Fjords, northern lights, reindeer – Norway is the dream of many nature lovers and outdoor sportsmen. The lonely and impressive natural landscape invites you to discover it in summer and winter, whether on foot, by bike or on skis. In our travel guide you will find places that you should not miss during your holiday in Norway. And on top of that, there are a few insider tips.
Read on
Outdooractive Editors  Verified partner
Author of this page

Along the Norwegian Atlantic coast, water and ice have formed a fascinating fjord landscape over millions of years. The "only" 2650 km long coastline is extended to 25,000 km by the numerous cuts in the valley. The best known are the Geiranger and Nærøyfjords, which are protected by UNESCO, and the Trollfjord.

Along the coast there are about 150,000 islands and archipelagoes. The most famous archipelago are the Lofoten Islands north of the Arctic Circle, Spitsbergen also belongs to the Norwegian territory despite its great distance from the mainland.

The glaciers were not idle inland either. High mountain ranges alternate with barren plateaus (mountains). Large parts of this highland are now under nature conservation, such as Jotunheimen, Dovrefjell-Sunndalsfjella and Hardangervidda. Also of glacial origin are the deep valley cuts and inland lakes with fascinating viewpoints like Preikestolen and Trolltunga.

Contrary to popular belief, the North Cape is not the northernmost point of Europe - but it is still a popular destination. Situated on the Norwegian island of Magerøya, it attracts around 200,000 visitors every year. For over two months, the midnight sun shines every summer at the North Cape. The other extreme follows in winter: it doesn't get light for more than two months. But in winter you have all the more the chance to observe the famous northern lights.
Viewpoint · Nordkapp
North Cape Magerøya
Nordkapp
from Wolfgang Paulus,   Outdooractive Editors

Norway's mountainous landscape is perfect for hiking, mountain and trekking tours. Several-day tours through the Norwegian national parks are particularly popular. Because the right of public access allows everyone to move freely in nature - even camping, fishing, making fires or boating.

Norway is also particularly well known for its wide range of winter sports. Skiing, cross-country skiing or a dog sled tour? No problem in Norway. You can even enjoy the snow on the Norwegian glaciers in summer. And those interested in the history of winter sports will find detailed documentation material in the Holmenkollen Ski Museum.

History and Culture of Norway 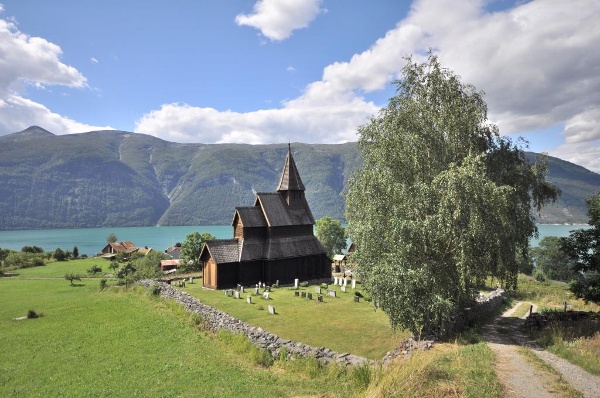 Hardly any other culture has shaped Norway as strongly as the Vikings. In the relatively short time from 800 to 1050 A.D. the Viking leaders managed to discover and populate the country to one and many of the surrounding islands (Iceland, Faroe Islands, Grasland, Newfoundland, Orkney, Shetland).

The most famous testimonies from medieval Norway are the stave churches. It was not until the end of the 13th century that the pagan religions of Scandinavia were almost completely ousted by Christianity. For this reason, numerous pagan elements such as scorpion fish and odind representations can still be found inside the 33 stave churches that still exist today. The oldest stave church is located near Urnes on the Norwegian Sognefjord.

Important terms in Norway's history are "shipping" and "Hanseatic League". The most important commodity shipped to Lübeck by German traders was dried fish from northern Norway. Today, the Bryggen district of Bergen is a reminder of the Hanseatic era. Norwegian explorers also set sail into the world's oceans by ship. For example the polar researchers Fridtjof Nansen, Otto Sverdrup and Roald Amundsen, whose history can be followed in the Frammuseum in Oslo.